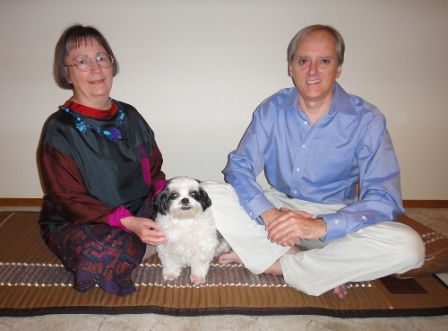 Michael Petrovich and Carol Shelley co-own the business Healing Waves, LLC, and registered their business as an independent Richway distributor. Here we explore their personal journey to reach Royal Family in record time.

For many years, Michael Petrovich utilized his undergraduate degree in Mechanical Engineering and Masters Degree in Business as a business consultant for large corporations. Later as Michael became older he noticed friends and family having health issues, he then took a personal interest in health related products. His growing health interests lead to purchasing the Acuscope/Myopulse System in 2002, an electronic medical instrument for pain and stress management. Michael then setup the system with a naturopath who utilized this equipment under his new business Healing Waves. The intent was to develop a business devoted to finding equipment that would assist people to a higher state of health and vitality.

After a year, the naturopath decided to give up her practice and gave Michael the equipment back. Since he didn’t want the equipment to sit unutilized he decided to take the Acuscope training and learn how to use it. At the same time his consulting business was slowing down which additionally prompted Michael to go further into developing his Healing Waves business mode. Subsequently, the Acusope/Myopulse services provided much relieve for chronic pain issues, however Michael was still looking for something that would provide his clients more self-empowerment to improve their health.

During 2007, friends Sandra and Lawrence Kennedy were visiting the area for a tradeshow and contacted Carol about the BioMat, however at that moment Carol wasn’t inspired enough to go try it out. Later she ended up taking a 2-day drive to South Dakota and on the way back stopped over at Sandra and Lawrence’s house near Missoula, MT. After driving 673 miles Carol was extremely fatigued and could barely talk when she arrived. Sandra immediately directed her to come sit and rest on ‘this thing’. Within 15 minutes of sitting on a Mini-BioMat Carol was completely restored! Of course she was very intrigued and wanted to know more about this technology. During her research Carol was familiar with the positive benefits of negative ions, however she was shocked to discover that Germany had been using infrared technologies for over 80 years. And Asian countries were using infrared for a variety of ailments, the recovery cases she read about astonished her. After intensive research on the BioMat technologies, Carol convinced Michael they needed one and ordered a Professional BioMat from Sandra and Lawrence.

At that time, up-line distributor Libby Edwards was local for Carol and Michael and was of great assistance providing mentoring on their new Richway business. She came to the local tradeshows and helped show them how to setup and demonstrate. Carol and Michael are very grateful for Libby’s wonderful support.

Healing Waves signed up with Richway in May 2007 and did a booth in June at the tradeshow for the American Holistic Medical Association. In August during a county fair Michael was still new to the BioMat technology and decided to use pain level cards to evaluate levels before and after BioMat use; he would ask what their pain level was on a scale of 1 to 10 before and after using the BioMat for fifteen minutes. It was during this event that Michael and Carol realized they had a powerful product. Demos were provided to some that had pain levels around 8-9 before the BioMat and after fifteen minutes they would feel complete pain relief. They also witnessed 22 people (out of 23) with fibromyalgia receive immediate relief in 15 minutes. The 23rd person was a vendor who came back for a 45 minute BioMat session and the next day reported having the best sleep ever. Michael shares they’ve seen tremendous BioMat results with fibromyalgia.

Michael claims they weren’t ‘hot distributors’ as it took Healing Waves a year to reach Diamond level, a longer time than several distributors they sponsored. After about a year Michael used his statistical analysis knowledge to learn how to optimize the binary system. In the beginning it was obvious they had lost a lot of money from not fully understanding the binary system. Through statistical analysis he was able to optimize the binary payout with something he refers to as binary compounding. Since then Healing Waves has doubled their profit every year thereafter.

During our interview I asked Carol if her background was in a health related profession and she said, "If youÓre asking me if my background prepared me for the BioMat business the answer is absolutely not!" Carol holds a degree in Graphic Design and has always been interested in health mainly through a social connection with an astute naturopath that taught her a lot. Carol also worked in billing, as a receptionist, and management at a doctor’s office/hospital, but never finding that innate workplace she felt passionate about. When the BioMat came into Carol‘s life she had been suffering from bursitis and after 6 months on the BioMat the pain from her bursitis was tremendously alleviated. This was a huge benefit that inspired Carol, plus it was the first time she felt truly passionate about something.

Another aspect that motivates Carol about the BioMat is that it empowers the individual who uses it. Carol realized after training in Reiki, Quantum Touch, and Chinese Energetic Medicine that those modalities took her time, presence, and personal involvement to help someone. Additionally she noticed the egos of many healers become involved when assisting someone; look at me and let me show you what "I" can do for you. It is more important to Carol to share something that the individual could independently utilize for self-help and healing.

For Carol the BioMat provides therapy where the individual can take care of themselves and restore their health without her presence. She feels like a conduit for people to learn about the BioMat, that the BioMat sells itself, and empowers the individual. For the first time in Carol's life she feels passion about her work, like a 'WAVE' that is propelling her forward to share the BioMat technology... and she's excited about that!

Both Carol and Michael feel very grateful for the BioMat technology and the business plan. Their customers love the product and report wonderful therapuetic benefits creating a win-win for everyone. 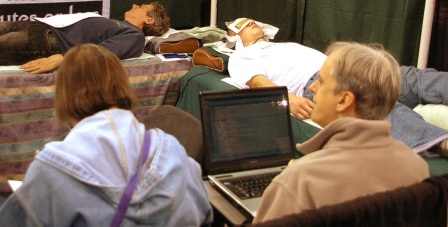 At the end of 2009 Carol went fulltime into the BioMat business and Michael joined her fulltime in 2010. They market their RichWay business three ways via local health professionals, web marketing, and tradeshows.

When asked how they prepared for the Royal Family challenge, they said they grew their business until the binary commissions were supporting the requirement of $50,000.00 within six months. What was remarkable is they made Royal Family in record time by reaching their goal in only sixteen weeks!

Many take the Diamond Challenge to assist in attaining the requirements for Royal Family status, however Healing Waves never took the Diamond Challenge. That said, Carol and Michael feel that it took their partnership to support the growth of their business. They cannot imagine doing this as an individual, teamwork is essential.

Another unique aspect that Michael and Carol did was that they provided FREE BioMats to their family. Most MLM companies recommend that they begin their business by selling to family and friends first. Howver, for Healing Waves helping people comes first. So they provided BioMats for many family members and when they conduct a tradeshow they attend with the approach of helping people instead of focusing on how many sales they can make. With this mindset they provide therapuetic BioMat demos to help people feel better and then let the product promote itself.